NEWARK, N.J. (February 20, 2018)– The Eagles – Don Henley, Joe Walsh & Timothy B. Schmit, with Vince Gill and Deacon Frey - have added five more “An Evening with the Eagles” concerts to the 2018 tour. The new dates will include a highly anticipated stop at Prudential Center on Friday, October 12.

Tickets for the newly announced dates are set to go on sale Friday, March 2 at 10 A.M. local time through Ticketmaster.com or by calling 1-800-745-3000. Tickets will also be available to after 11 a.m. at the Prudential Center Box Office.

American Express® Card Members will have the opportunity to purchase tickets before the general public beginning Tuesday, February 27 at 10 AM through Thursday, March 1 at 10 PM local time. A limited number of LaneOne VIP Packages will also be available, including great seats, transportation, preferred entrance and more. Additional presale opportunities will be available beginning Thursday, March 1 at 10 AM. For complete ticket information, visit Eagles.com.

Media have raved over recent concerts –
…this recent tour's set list has leaned heavily on the group's mighty catalog of familiar and, based on the crowd's wildly enthusiastic response, beloved singles. – Rolling Stone

…as expected, musically it was almost perfect throughout the night. - Forbes

…the powerful performance felt like a proper celebration of Frey and the legacy of one of the most successful bands of all time. – Time Out

The Eagles understand that getting fans to fall in love with a band …requires songs that make listeners believe they belong too. – Los Angeles Times

The EAGLES are one of the most influential and commercially successful American rock bands of all time. With their profound lyrics, soaring harmonies and country-tinged melodies, they created a signature Southern California sound. The Eagles have sold more than 120 million albums worldwide, have scored six #1 albums and have topped the singles charts five times. The band has been awarded six GRAMMY® Awards. The Eagles have performed sold-out concert tours worldwide throughout their career. The band’s 2014 History of the Eagles Tour broke numerous U.S. box office records and included five sold-out concerts at Madison Square Garden in New York, NY and six sold-out concerts at the Forum in Inglewood, California.  The Eagles were inducted into the Rock & Roll Hall of Fame in 1998 in their first year of eligibility and received the Kennedy Center Honors in 2016. 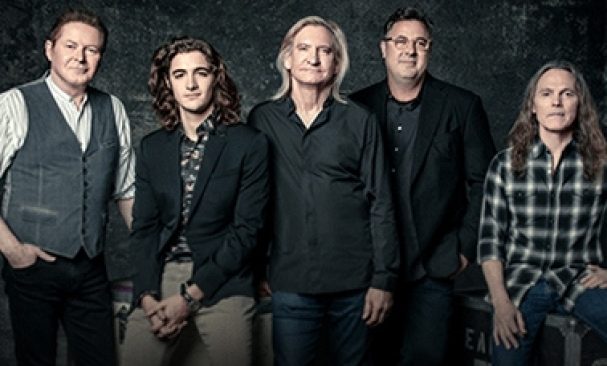